The Motherboard Pinball tour with UK/Swiss trio Kuster – Ferrari – Byrne starts TODAY at NQ Jazz in Manchester, which is also the home of our label Efpi Records. On Tuesday we’re in London for a special London Jazz Festival edition of LUME and then we’re playing at Jazz At The Lescar in Sheffield on Wednesday.

As this tour is a celebration of our new album (recorded remotely during lockdown) I think now is a good time to go back to the source and take a deep dive. What follows is a step by step guide to the tracks from our new album. So put the kettle on, turn your phone on silent and prepare to leave reality as you know it…

We begin our journey at Silicon Intersection, a busy junction on a sci-fi superhighway where vehicles move chaotically in different directions at high speed, narrowly avoiding collision. Meandering saxophone and restless angular guitar fight each other for space over a busy, pulsating modular synth beat.

Walking the Dogotrons portrays a seemingly familiar suburban scene of families and their pets, although on closer inspection it becomes clear the ‘dogs’ are in fact all robots… The track opens in a fittingly leisurely mood, with a bouncy synth pattern and ascending saxophone lines, but the scrambling guitar gradually asserts itself, disrupting the fragile tonal and rhythmic equilibrium until elements of time and tonality disintegrate.

Transistor Torment is a brief chaotic meeting of three voices – restless, urgent, and vexed – quickly followed by the epic Cyborg Aerobics. Here we are immediately launched into a harsh, alien sound world, where disjointed guitar and saxophone scuffles orbit a relentless, metallic driving beat. Finally we collapse into an exhausted heap – aerobics proves to be a severe workout, even for cyborgs.

The other-worldly Disintegrated Pixel Bluegrass features ephemeral saxophone melodies floating over a backdrop of a low-key pulsating synth pattern and disembodied tremolo banjo, before the album’s title track Motherboard Pinball sees our intrepid trio bouncing off objects and dodging random pinging obstacles at their peril. We emerge at an edgy industrial scene somewhere deep in our universe for Used Planet Disposal, where the unremitting synth, jarring guitar wails and disturbed saxophone paint a grim picture of giant robots crushing planets with zero emotion. In contrast, The Metaverse Inn Lounge is a place where you can relax – or is it? An uneasy anxiousness fizzes underneath the seemingly calm surface; maybe advisable to down that drink and move on…

Our adventure ends with Requiem for a Red Dwarf, a poignant farewell to a dying star set deep in the universe, where meteorites, space dust, and interplanetary droids occupy our extra-terrestrial sound world – about as far from our locked-down Earth as it is possible to get.

I felt moved to share some of the cool experiences I’ve had in the first half of 2018. Looking back, I got to play with a wide variety of ensembles, which has taken me to some interesting places (both geographically and creatively).

In March I was super lucky to go on a mini tour of Mexico with Amy Lives. We played three dates in Monterrey, Guadalajara and Mexico City. The group features original members of the Amy Winehouse band, with an aim to continue sharing Amy’s much loved music with the world in an authentic and progressive way. It was a fantastic experience to meet so many warm and open-hearted people. Our gig in Mexico City (photo below) was sold out!!

Straight after returning from Mexico, I went to Paris to perform at Easter Sounds Festival with Brit Funk legends Atmosfear. The group led by bassist Lester Bachelor was a major player in the first Brit Funk wave back in the 80’s, notably with the worldwide hit ‘Dancing In Outer Space’. Easter Sounds Festival was an eclectic mix of DJs, live bands and jazz dancers of all generations – including the amazing Jazzcotech dancers. An inspiring few days! 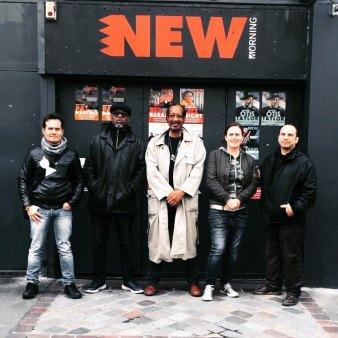 In April I performed with the large ensemble Beats and Pieces, at their Jazzahead showcase in Bremen. This was the first time I’ve played with the band, and the circumstances were quite unusual: The regular first altoist Ollie Dover had a dental emergency and couldn’t play the gig. Luckily I was at Jazzahead as a participant (my fourth year in a row), so they asked me if I could jump in. Only problem is I didn’t have my saxophone and (more worryingly) I didn’t have my mouthpiece, which is very personal and specific to each sax player. But… through a stroke of luck, the guitarist Anton Hunter was doing a Sloth Racket gig with my good friend Cath Roberts in London the night before. Cath gave him a bag of mouthpieces, ligatures and reeds to fly out with the next morning. One mouthpiece, ligature and reed combination worked with Ollie’s sax. The gig went well! I’m also joining them for their 10th anniversary gig at Manchester Jazz Festival on 27th July.

I really enjoyed doing a bunch of improvised duo gigs with my LUME partner in crime Cath Roberts. In March we played at Soundling Festival run by Megan Steinberg, April at Bråk (a monthly improv series at Water Into Beer in Brockley run by Cath, Tom Ward and Colin Webster) and in May we kicked off a new monthly improv night ‘Creations’ run by cellist Shirley Smart at the Green Note in Camden. We’ve got a few more duo gigs coming up later on in the year… we’re playing at a Raw Tonk event – curated by label boss Colin Webster – at Hundred Years Gallery on 9th September and at Linear Obsessional Live in Brockley on 30th September.

Playing a late set at Pizza Express with Soul Immigrants in May was lots of fun. I’ve been involved with this band for over 10 years, and I still love the gritty, earthy vibe – something that is the mark of a long running band. SI goes out as a trio most of the time these days, but they invited me to come back and guest with them on a few gigs recently. These were all located in London’s Soho: The Spice of Life, Ronnie Scotts Upstairs Bar and then Pizza Express to end this series of gigs. We’ll be returning to Ronnie Scotts Upstairs bar for another night of unbridled groove on 4th November!

In June I played with the fabulous Nerija at Royal Welsh College of Music and Drama in Cardiff. I was depping for Cassie Kinoshi, who is a great saxophonist and composer. The gig was in the impressive new foyer at RWCMD in front of a packed audience. We played quite a few new tunes from their upcoming album. I enjoyed the fact that there was plenty of space to improvise!

Later on in June I played at Supersonic Festival in Birmingham with Bombyx Mori, an electronics/improvising sax and guitar duo with Ed Riches. We played on a stage curated by Ideas of Noise, which is a new adventurous festival run by Andrew Woodhead and Sarah Farmer. Ed and I have played together in many different musical ensembles and as a duo a few times in the past. It was great to revisit the duo format whilst using electronics, which always adds an element of unpredictability/excitement to the experience.

In the beginning of July I played with a new quartet featuring Johnny Hunter, Chris Sharkey and Mick Bardon at NQ JAZZ, a great original jazz night in Manchester run by Kyran Matthews and Emily Burkhardt. The group played post rock influenced original compositions by Johnny, with a large dose of electronics and improv. Chris brought along his recording equipment, so we managed to capture the madness and will hopefully expose more audiences to this music in the near future!

I’m pleased to say that my quintet Entropi has a cluster of gigs in October. In the quintet I am joined by Andre Canniere (trumpet), Rebecca Nash (keys), Olie Brice (double bass) and Matt Fisher (drums). On Thursday 4th October we are performing at Brighton Alternative Jazz Festival launch at the Verdict Jazz Club. The next day, Friday 5th, we’re playing at a Match & Fuse curated late session at The Vortex (double bill with Northern band Voronoi). On 13th October we’re playing at Marsden Jazz Festival. That performance will be recorded live and broadcast on BBC Radio 3’s Jazz Now programme. We’ll be playing some new material, which will make its way onto our third album due to be released on Whirlwind at some point in the near(ish) future.

In November I’m going to be involved in a ridiculously exciting project for EFG London Jazz festival, more on that soon! In December, plans are coming together for a cluster of activity with Cath Roberts’ ten piece ensemble, Favourite Animals, including a London date at City University. LUME is hatching plans for 2018/19: A new workshop series is under development as well as some cool happenings for 2019. Watch this space…

Thanks for reading and stay tuned!